Tips for Meeting Innovators from GameOn 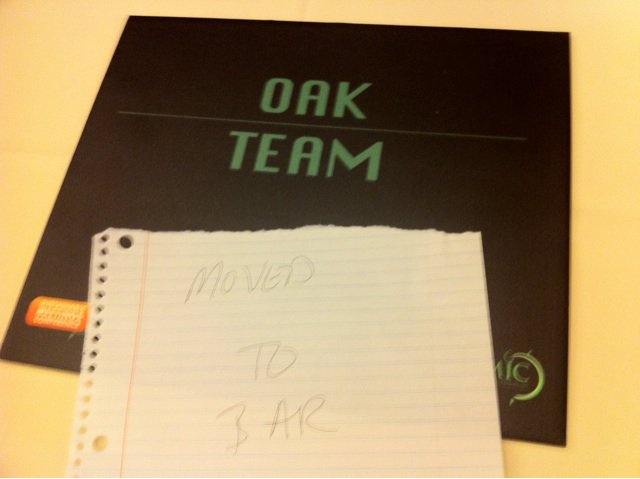 What would happen if you transformed your event with a game? Would it inspire creativity, problem solving and innovation among your attendees? Would it energize everyone? Or would it be so stressful that it wouldn’t be worth the effort?

This week, the Green Meetings Industry Council used gaming to transform their learning and communication platform. GMIC designed an interactive and collaborative game that created incentives for attendees to (A) apply the learning from the conference in real time, (B) support sponsors and exhibitors and (C) share the key messages of GMIC via social media with the rest of the world.

The objective of the game was to earn the most points. Points were awarded by doing the following:

> Complete a Group Case Study project that helped integrate all of the learning.

The Leaderboard kept track of the points earned in a pseudo real-time way. Some of the points were recorded digitally. While other items, like the case studies, had to be manually scored and entered into the system. You could check the leaderboard anytime by logging into a mobile application and seeing where your team stood.

GMIC pre-loaded Team profiles into the system to help get teams started. Then each team self-formed and added members to their team roster in the game. As a virtual participant, I couldn’t see who was on which team. So I had to get some feedback on teams from Twitter. Greg Ruby (@gregruby) and Brian Hunt (@brianhunt04) told me that Team Oak was the best. So, I accepted their invitation to join Team Oak. Brian and Greg were right – we were good.

The system that kept all of this together was an iPad app and a mobile app made by QuickMobile. Each team was given an ipad that had the official team app on it. This app allowed the team to do a lot of different types of data entry and engagement activities.

As a remote participant – I had a mobile app that helped me see how Team Oak was doing. I couldn’t enter any data into the system, but I could follow along with my team. This gave me access to the leaderboard and the case study as well as various other items – like a list of attendees. 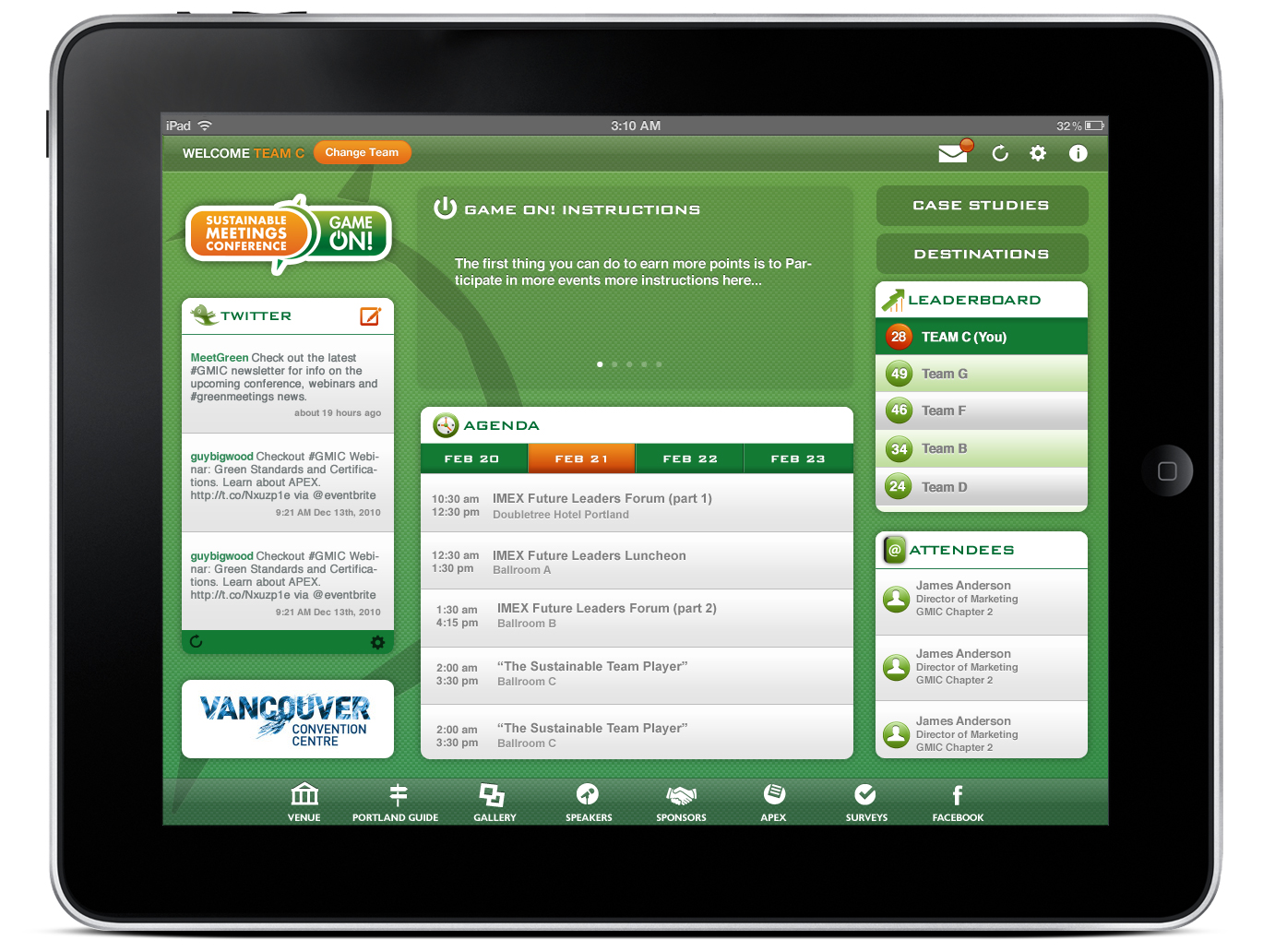 Note: If you did use the iPad application, please tell me about your experience in the comment section below. I would be interested in hearing how it worked for you and your teams.

Myself, Tahira Endean (@tahiracreates, Vancouver), Brandt Krueger (@brandtkrueger, Minneapolis), Sanne Jolles (@sanne_j, Amsterdam), Katherine Manfredi (@kmanfredi, Florida) and various others were active virtual participants. In one form or another, we were able to join teams and participate in the group projects onsite.

I really appreciated this opportunity to be included in the group activity. It would have been very easy for the organizers to say no, because it really wasn’t part of the original plan. It turns out that GMIC literally embraced a message from Event Camp Twin Cities: “Experimentation is our get out of Jail Free Card…if we weren’t having tech hiccups then we wouldn’t be innovating.” With that as guiding motto – they were willing to let attendees create and push the boundaries. 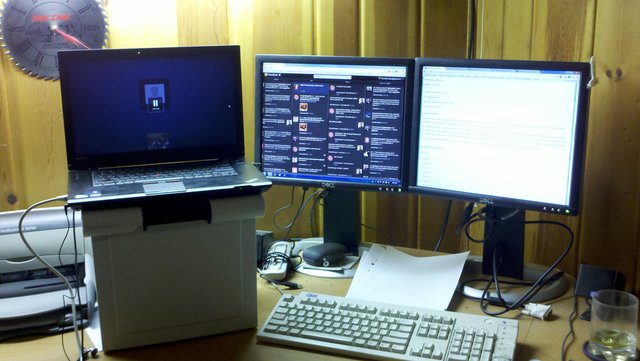 For Team Oak, we skyped in Brandt Krueger and myself into our team meetings to discuss the case and various strategies. Brandt Krueger skyped in via skype audio onto the team iPad. He was placed in the center of the table. I was video skyped in and took a seat around the circle. John Chen (@bigkid) and Greg Ruby (@gregruby) were gracious enough to help put it all together. 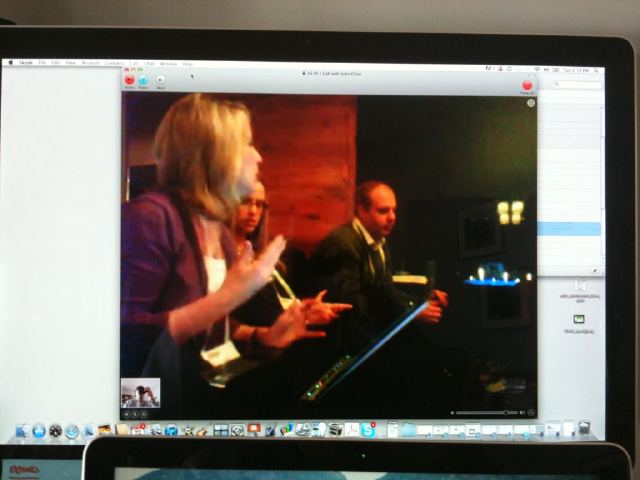 View of Team Oak from my Virtual Perspective

I liked the experience because I could observe the non-verbal communication from the other attendees that accompanied what they said. However, it was not always possible to hear all team members all of the time. Did I mention that we met at the bar?

Here is a video interview with some of my thoughts on being a virtual participant.

Tahira Endean (@tahiracreates) had an entirely different experience. They had problems getting skype to make a good connection. As a result, she used email and text chat to participate in the group. This made her experience dramatically different from my own. Also, it changed the way that the communication dynamics between her f2f team and remote participants.

The case study was brilliantly designed. It challenged us to practice: objective setting, destination analysis, pricing, business analysis, meeting architecture and establishing a measurement strategy. I really appreciated the multiple dimensions that were inside of the case study. Elizabeth Henderson (@ehenderson) did an amazing job.

In my opinion, one of the most important elements in a competitive game is the debrief. This is the part where you find out if you won or not – then figure out what you did wrong. One thing that struck me right off the bat – was Paul Salinger saying that he let us down on objective setting because none of us did it correctly. The irony is that I remember him asking several times on day 1 – do you all know how to do this? The entire room said we do. I guess we didn’t afterall.

Our team ended up second overall and third in the case study. While I was proud of our efforts, Team Magnolia rocked the case study. I would have been interested in hearing them talk about their proposal and get their take on some of the high points.

Inspiration for the game design came from the book Total Engagement by Byron Reeves and J. Leighton Read. (http://www.totalengagement.org/) I haven’t read the book – but plan to pick it up soon.

Equally important, Paul Salinger opened and closed the gaming sessions by talking about Divergent thinking and Convergent thinking. I first learned about those elements of game design from the book Gamestorming. (http://www.gogamestorm.com/)

While the game was cool – one of my big take aways was the wonderful welcome and feeling of inclusion that I got from the organizers and attendees. They went way beyond the call of duty.

Through my virtual window, I can confirm that this was a very cool event. The tight integration of the game into the event objectives helped make the gaming element a success. While the technology was slick – the real key in my mind was a good game design around the objectives and content of the event.

Tell me about your experience. What did you like most about the gaming elements? What would you like to see improved? Do you think this format could scale up to 1000 attendees and beyond?

Samuel J. Smith is the Managing Director of Interactive Meeting Technology, LLC. He wakes up every morning to save the world from stuffing attendees in chairs for hours on end at events. Oh, and he has small children who usually want some breakfast.