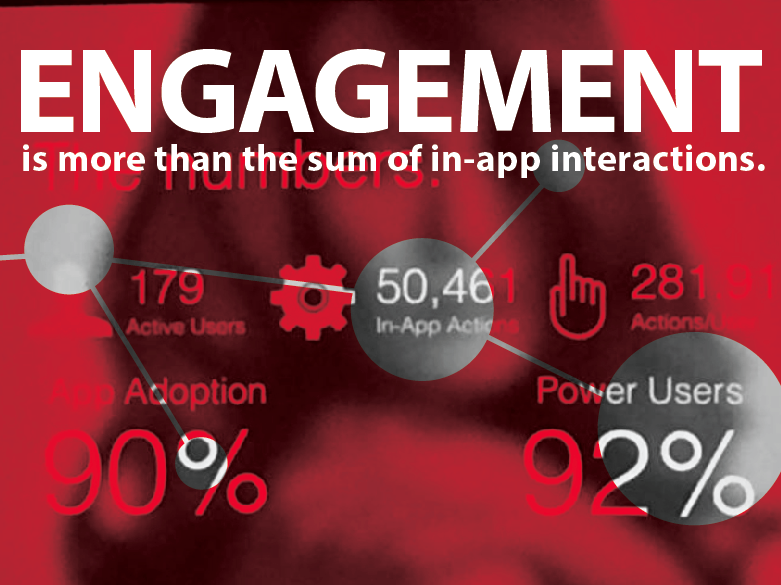 Your Event App’s “In-App Actions” ARE NOT Audience Engagement

So…you are telling me that clicking on the agenda button 14 times is audience engagement? Not in my world friends.

–       Connecting attendees to content through games by getting them to answer 25,000 questions about your products and services.

–       Capturing 1,000 votes from employees on 20 potential initiatives that they created and prioritizing the top 5 initiatives.

At Interactive Meeting Technology – we want you to succeed at audience engagement by driving business results.

Your definition of success at audience engagement should change from event to event depending on the event type you are organizing and the audience (Think Millenials vs Boomers or Engineers vs Sales).

There is not a single business leader that I know who would accept a statistic like “in-app ractions” from any event app as meaningful business results. You shouldn’t either.

Having said that – here are three free resources that will get you on the right track for thinking about audience engagement:

(1) Event Goals: If you want steak don’t order the chicken.

(2) Creating Interactive Meetings: How to Turn Attendees into Active Participants

(3) [Presentation] How to Succeed at Attendee Engagement

END_OF_DOCUMENT_TOKEN_TO_BE_REPLACED

How to Succeed At Attendee Engagement [Presentation]

How to Succeed At Audience Engagement from Samuel Smith

What’s in the presentation?

You are most likely reading this post, because you want to succeed at audience engagement.

Why should you pay attention to this presentation?

We are helping marketers, association executives, agencies and others succeed at attendee engagement across all of the events in their portfolio.

Luckily we are good at it!

Do you need more help?

It’s important to us that you are successful at attendee engagement in your events. There are three ways we can help you.

(2)  We can provide consulting support over the phone or onsite production and design.

Whether you have an event with a few dozen people or a customer event with 10,000+ attendees. We can help.

Good Luck with your next event!

END_OF_DOCUMENT_TOKEN_TO_BE_REPLACED

This weekend, I attended Event Camp East Coast. It was organized as a structured unconference and followed the Conferences that Work model. Conferences That Work is one of many group processes that put the participants at the center of the event to establish common ground, build community and create something together.

Are you still with me?

There was no production equipment. No stages. No livestream. And only a light twitter stream. The most advanced technology at the event was EventMobi from Bob Vaez.

The event was unplugged. Yet, we were so plugged in.

Identifying Our Talents and Strengths

There were two key processes that helped us get started. The first was a process called the “round table.”  In that process, we went around the room and answered three questions:

> What do you want out of the event

> What can you offer

Two scribes then took notes on flip charts and posted those around the room.

Out of that process, I learned about the hidden talents of the other attendees that were in the room. So, when it was my turn to go – I could say – “I want to learn about Design from Deb Roth, Improv from Jenise Fryatt, Advanced Social Media from Kiki L’Italien and talk about Brain learning with anyone that wants to talk about it.” (@brainstrength – identified herself as an expert on brain research when it was her turn.)

This process was lengthy and tiring, but it helped me get to know some key facts about the other attendees. This came in handy once we cracked open the wine.

Tapping Into Our Wisdom

While consuming wine and getting to know each other better, we started to build an agenda. This was the second step.

We created the agenda by coming up with discussion topics and then writing our name down beside each topic. If we had expertise and willingness to lead a session – we could indicate that with a letter code.

Then, while the rest of us continued to talk and network – a group of 6 people went into the “serious room” and sorted everything out. What emerged in the morning was a 14 session program that tapped into the collective wisdom and talents of the people that we had at the event.

For some people, this step was too unstructured and too slow for their tastes. For me, it gave me plenty of time to have productive and engaging conversations with a bunch of different people – including some who were skeptical.

The next morning was a lot of fun! The session rooms were setup with chairs organized in a circle with 1 flip chart. The session leader would kick off the session with a few points and then a dialogue would take place.

Each room had a circular seating arrangement. This made sure that we were all equal. We all had an opportunity to ask questions or make comments when we wanted. Since, we knew each other – the dialogue flowed much smoother than if we were unknowns in the session.

While we didn’t get a powerpoint deck with 62 slides from each presentation to take home – what we did get was a bunch of new resources for answers, help and support.

Those resources were our fellow attendees. The people.

The final sessions gave us an opportunity to take a step back and reflect on what we had seen, experienced and learned. Then we could choose to share those insights with our colleagues around the room. (We had moved from “fellow attendees” to colleagues at this point). Since each of us came from a different place we took away something different.